To share your memory on the wall of Geneva Siler, sign in using one of the following options:

She was loved dearly by her entire family and will be missed more than anyone could possibly know.

The family will receive friends from 6 to 8 p.m. on Wednesday, March 27, 2019 John M. Oakey & Son in Salem. The funeral service will be held at the chapel of John M. Oakey and Son on Thursday, March 28, 2019 at 2:00 p.m. Geneva will be laid to rest next to her predeceased husband and our father, James Allen Brumfield at Johnson Family Cemetery in Christiansburg.

Online condolences may be expressed at www.johnmoakey.com.
Read Less

Receive notifications about information and event scheduling for Geneva

We encourage you to share your most beloved memories of Geneva here, so that the family and other loved ones can always see it. You can upload cherished photographs, or share your favorite stories, and can even comment on those shared by others.

So sorry for your loss. 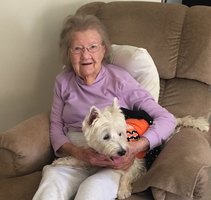